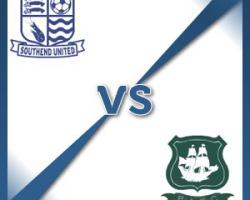 Southend V Plymouth - view commentary, squad, and statistics of the game live.Backline issues for ShrimpersSouthend have defensive problems ahead of the visit of Plymouth.Luke Prosser was sent off at Northampton and will serve a one-match suspension

Prosser joins Cian Bolger, who still has three games of his ban to serve for his red card at Dagenham, on the sidelines.Shrimpers boss Phil Brown could slot either John White or Jerome Binnom-Williams in at centre-half but he is trying to make a loan signing in time for Saturday.Barry Corr is a doubt after the striker suffered a back injury in training this week but winger Kevan Hurst could come back into the reckoning, after missing the last two games with a hamstring problem.Plymouth have defensive worries of their own with two centre-backs set to watch from the stands.Peter Hartley is set for three weeks on the sidelines after suffering a recurrence of a groin problem while youngster Aaron Bentley serves the second of his three-match ban following his red card against Oxford last month.The Pilgrims are also hopeful of adding one or two loanees to their squad ahead of kick-off against the Shrimpers.Meanwhile, boss John Sheridan has confirmed that Jamie Richards will return from his loan stay at Linfield after this weekend's clash