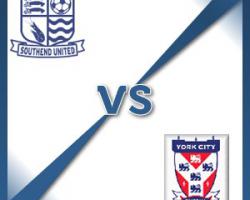 Southend V York - view commentary, squad, and statistics of the game live.Corr banned for York gameSouthend striker Barry Corr is suspended for the visit of York.Corr was sent off during the win at Portsmouth last weekend and must serve a one-match ban

The 29-year-old is one of just two players unavailable to Shrimpers boss Phil Brown, along with long-term absentee Mads Ibenfeldt.Midfielder Gary Deegan and defender Cian Bolger both come back into contention after serving their one-match and four-game suspensions respectively.Centre-half Adam Barrett (calf) and winger Kevan Hurst (hamstring) are fit again and will also hope to make the matchday squad.York goalkeeper Michael Ingham could return to the squad following a shoulder injury and defender Dave Winfield is back in contention.Ingham last appeared in the FA Cup defeat at AFC Wimbledon in mid-November - Bobby Olejnik, on loan from Peterborough, has been starting in goal and should continue - while Winfield has been sidelined with a thigh injury followed by tonsilitis.Striker Emile Sinclair and defender Mal Benning both made impressive debuts in last week's home draw against Burton and are likely to resume, but centre-half Stephane Zubar completes a four-game ban.Winger Anthony Straker has joined Motherwell on loan for the rest of the season as the Minstermen chase their first league win in five matches